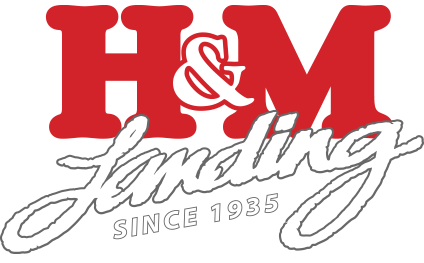 The Excalibur returned this morning with 17 Bluefin Tuna and 1 Bonito!

The Relentless returned this morning with 5 Bluefin Tuna and 4 Yellowtail!

The Legend returned this morning with 18 Bluefin Tuna and 18 Yellowtail!

The Constitution returned this morning with 25 Bluefin Tuna!

Howard Minor and Ralph Miller Sr. (Barney), two partners in Harbor Water Taxi, took a day off to fish marlin. The two men got hooked on the sport and thought seriously about founding a sportfishing company.

Mascot II made its maiden voyage from H&M Sport Fishing with 35 anglers who sacked 136 yellowtail at the Coronado Islands.

The San Diego Sport Fisherman’s Association was formed to define fair practices in the industry. Minor played a key role in its development.

Mascot III was incorporated into the fleet.

World War II began. Some vessels in the H&M fleet were put into service as military transport and supply craft.

Helen Jackson bought Otto’s fleet to become one of the first women at the helm in the sportfishing industry.

The first Albacore sportfishing trips. Skippers recall that it was difficult to persuade anglers to go after albacore. Yellowtail were closer and seemed to be the preferred game fish.

Malihini, the first sportfisher over 80′ was added to the fleet.

Ralph Miller, Jr. came into the business after his father’s death assuming control and administration of H&M.

The City of Santa Barbara petitioned H&M to develop sportfishing at the breakwater.

H&M Pioneered the first Natural History Expeditions into Baja California. An extensive natural history program was developed which attracted passengers from all over, including international markets.

65′ H&M Speed Twin, the first aluminum catamaran sportfisher on the West Coast, was launched. On July 18th the H&M Speed Twin broke the World Record by successfully pulling 58 water-skiers at once.

New docks and building, constructed under Ken Golden’s ownership, were completed and H&M moved into the facility it occupies today.

H&M was able to secure authority from Mexico to enter the Baja whale lagoons which had been closed to public access.

H&M Landing celebrated its 50th Anniversary, maintaining its position as the West Coast’s oldest, most experienced and diversified sportfishing company.

H&M Landing entered the world of cyberspace with its own website, https://www.hmlanding.com.